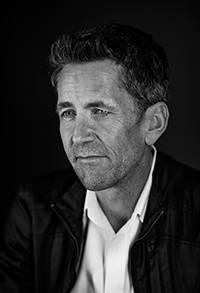 Jess Walter is the author of ten books, most recently the story collection The Angel of Rome and the best-selling novels The Cold Millions and Beautiful Ruins. He has been a finalist for the National Book Award and his short fiction has appeared three times in Best American Short Stories.

Walter won the 2005 Edgar Award for best crime novel (Citizen Vince) and the 2020 Langum Prize for Historical Fiction (The Cold Millions), as well as the Washington State Book Award and the Pacific Northwest Book Award. He has been a finalist for the LA Times Book Prize, the PEN/USA Award in both fiction and nonfiction, and the Pulitzer Prize (for journalism). His short fiction has also been awarded a Pushcart Prize and selected for Best American Nonrequired Reading and his work has appeared in Harper’s, Esquire, McSweeney’s and many others. His novels have been published in thirty-four languages. A former journalist, Walter lives in Spokane, Washington with his wife, Anne.