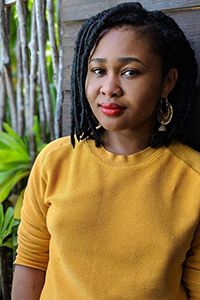 Born and raised in Port Harcourt, Nigeria, Chinelo Okparanta is the author of Happiness, Like Water; Under the Udala Trees; and most recently, Harry Sylvester Bird (forthcoming in 2022). Her essays and short fiction have appeared in The New Yorker, Granta, Tin House, the Kenyon Review, AGNI, among others. She is the winner of two Lambda Literary Awards and an O. Henry Prize. Other honors include finalist selections for the International DUBLIN Literary Award, the Caine Prize for African Writing, the Rolex Mentor and Protégé Arts Initiative in Literature, the New York Public Library Young Lions Fiction Award, and the Etisalat Prize for Literature. Okparanta has also been nominated for the Hurston/Wright Legacy Award and an NAACP Image Award in Fiction, and was named one of Granta’s six New Voices for 2012. In 2017, she was named a Granta's Best of Young American Novelist, and in 2018, she served as a fiction judge for the U.S. National Book Awards. She has also served on the judging panels for other major awards such as the PEN Open Book Awards and the Hurston/Wright Legacy Awards.